Our CTH:YAG Laser resonators are primarily employed in medical Laser systems for Lithotripsy and BPH (Benign Prostatic Hyperplasia) treatments, under ureteroscopic operations using optical fiber. You may want to know what happens inside of CTH:YAG crystal. Here’s an outline about it, which is extracted from “Infrared Laser for Biomedical Engineering” written by Professor Kunio Awazu of Osaka University in Japan.

See Fig.1 ” CTH:YAG Laser Oscillation line .”  In CTH:YAG crystal, 2.08 μm Laser is oscillated by the radiation transition from 5I7 level to 5I8 level of Ho3+ ion. It functions as 3 level-laser, considering 5I8 level of Ho3+ ion as the basic level. Cr3+ and Tm3+ ions are used as photosensitizers to improve oscillation efficiency for room temperature operation. Light energy from a flash lamp is absorbed in 4T2 energy band of Cr3+ ion and the energy is transmitted to 3T4 level. Tm3+ ion has 3H4 level between the grand level of 3H6 and the higher level of 3T4. 3T4 level of Tm3+ ion is close to 5I7 level of Ho3+ ion. Therefore, in Tm3+ ion the energy is efficiently transmitted from 3T4 level to 3H4 by cross relaxation between 3T4 and 3H6, then it is transmitted to 5I7 level of Ho3+ ion, and Ho3+ is pumped. That is, an inverted population between 5I7 and 5I8 levels in Ho3+ ion is formed. 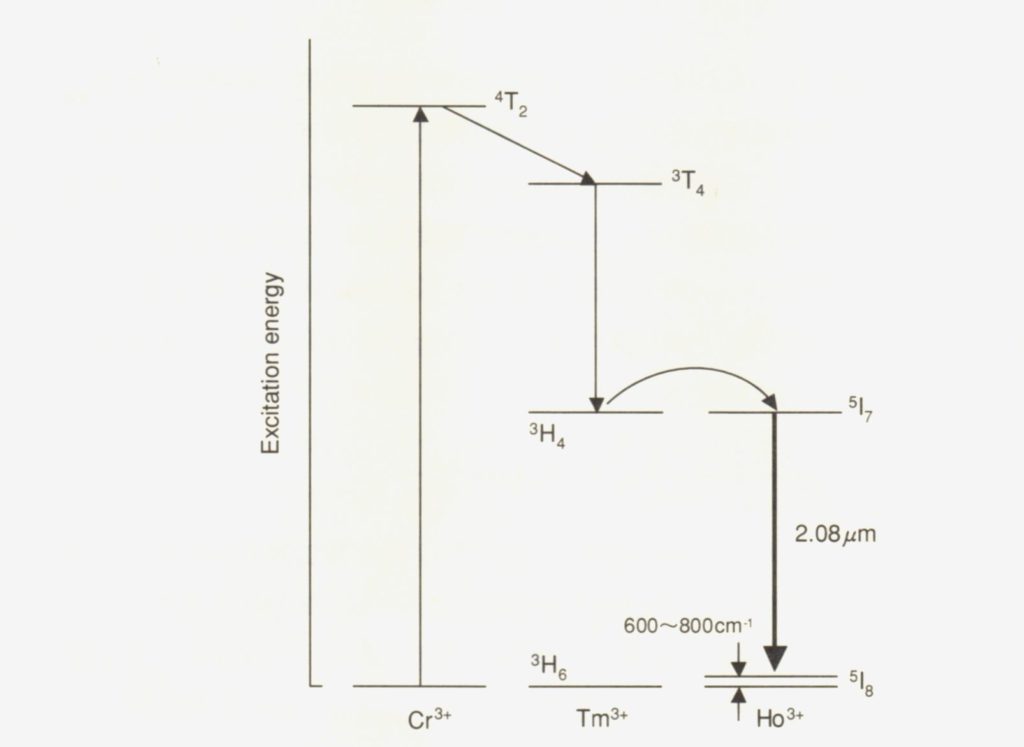